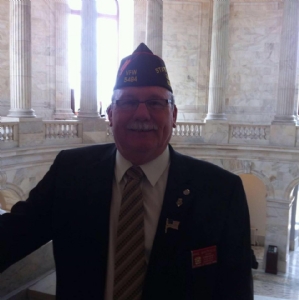 Mike joined the VFW in 1974 at Post 5484 in Providence, Ky, where he maintains his Legacy (GoldLevel) Life Membership. He has served the VFW in many leadership positions including but not limited to Post Commander 1977-78, All-State Post Quartermaster 1995-98, Assistant Inspector General 1995-96, District 2 Commander 2005-07.

Mike retired as a Mine Inspector and Supervisor for the Department of Labor Mine Safety and Health Administration in District 10, Madisonville, Ky. after 25 years of service to the Health and Safety of the Nations Coal Miners.

Mike is a member of the Honorable Order of Kentucky Colonels, American Legion, Life Member of VFW National Home for Children, Hopkins County Honor Guard, and Chairman Of The Board Of Directors for Joseph "Eddie" Ballard Program Fund at the Hanson Veterans Center.

He resides in Providence, Ky. with his wife Judy.