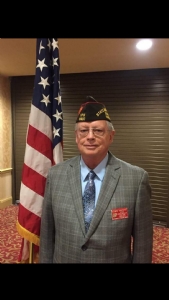 Edwin Vincent served in the United States Air Force from June 1965 to January 1995, retiring as a Chief Master Sargent.  He earned his eligibility to join the VFW the first time assigned to the 51st Fighter Wing at Suwon and Osan AB Korea earning the Armed Forces Expeditionary Medal and later the Korean Service Medal. He also earned the Southwest Asia Service Medal for service in the Gulf War.  His service in the USAF includes tours in Okinawa, Guam, Korea (4), and Saudi Arabia.  Stateside he was stationed at the following AFB's; Amarillo, Chanute, Little Rock, Tinker, Peterson, Warner Robbins, MacDill and Shaw.  He joined VFW Post 6937 as a life member in 2006 and has served as Sr. Vice Commander and currently as Post Commander.  He was elected District 5 Commander in 2015.

As Post Commander, he developed a Flag Etiquette Program which is presented annually to all Fourth grade students. This program is currently in its 3rd year.

As District Commander he prepared the program and assisted in conducting the first district wide Honorable Flag Disposal Program.  The program received wide praise from local news media and veterans organizations.
Edwin and his wife Malea, who is a life member of the VFW Auxiliary, have been married 20 years and reside in Bee Springs, KY.